Alençon - a medieval town in a strategic location

Situated in south-east Normandy, at the intersection of the roads from Paris to the Normandy coast and from the Channel ports to the south, Alençon (pronounced A-lonn-sonn) is a natural staging post and has been a place of strategic importance with a colourful military history since the middle ages. The town has existed since Roman times when it was a major fording point over the river Sarthe (the ford being at the location of the Old Bridge, rue de Sarthe).
Enquire Now - No Obligation

Alençon: World-famous Lace and Birthplace of Saint Theresa of Lisieux

Because of its position near major road routes, Alençon is handy for stopovers on longer journeys so some travellers halt overnight then move on without exploring further. Don't make the same mistake if you can help it! If you take the time to explore the "Pays d'Alençon" then you will discover a beautiful region with much to see and do but unspoiled by over-commercialisation. Alençon is the capital of the Orne, the most southerly part of Normandy. Away from the Atlantic influences, this area of inland Normandy has a different climate to the Normandy and Brittany coasts - it is generally drier and less windy, colder in winter but warmer in spring, summer and autumn.

Take a look at "What to See" for sightseeing opportunities (wonderful chateaux, castles, gardens, villages, forests and countryside to explore) and "What to Do" for a sample of the many activities (golf, fishing, walking, cycling, riding, canoeing, climbing) - there really is something for everyone in Lower Normandy and the Pays de Loire.


In the 17th century Alençon became famous for its lace called "Point d'Alençon" which is among the finest in the world.

The Alençon lace technique takes 4 years of apprenticeship and about the same again to master it completely. The method of production is extremely labour intensive, taking 7 hours to produce one square centimetre of lace, but it allows for extremely fine and sophisticated designs.

As a luxury item affordable only to the rich - the royal court and aristocracy - Alençon lace production went into decline following the French Revolution, but enjoyed a number of periods of resurgence in the 19th century before going into terminal decline with changes in fashion and introduction of cheap machine-made lace.

In 1976 the National Alençon Lace Workshop was established to ensure that the Alençon lace-making technique survives into the future.

in 2010 UNESCO recognised the exceptional quality and skill of Alençon lace by adding it to the "Representative List of the Intangible Cultural Heritage of Humanity". In its announcement the UNESCO committee said "Alençon needle lace is unusual because of the high level of craftsmanship required and the very long time that it takes to produce (seven hours per square centimetre)."

The Musée de la Dentelle in the centre of Alençon has a permanent exhibition of lace. The National Lace Workshops are housed in an adjoining building and are open to the public on Mondays, Wednesdays and Fridays in summer. Samples of Alençon lace are for sale in the museum shop but make sure your pockets are deep!

For more information on Alençon lace, including a video of the Alençon Lace Workshops, see our blog article "Alençon Lace - Frilling Stuff".

Alençon to the Middle Ages 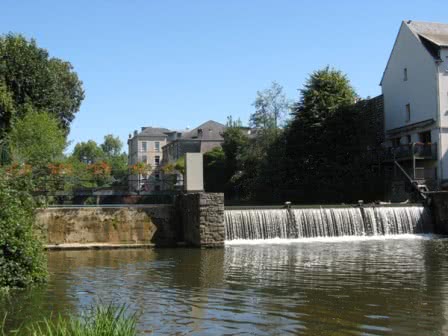 Alençon is thought to have been founded during the 4th century.

The name Alençon is first seen in a document dating from the 7th century; in gallo-roman times there was an important ford across the Sarthe at this point and Alençon takes its name from the Latin "al unco" meaning "by the hook" or "by the bend" in the river. The ford was located near the old bridge where rue de la Sarthe crosses the river (downstream of Pont Neuf).

During the 10th century Alençon was part of a buffer state between Normandy to the north and the Maine to the south. In 1047 William Duke of Normandy, better later known as William the Conqueror, laid siege to the town. The citizens of Alençon insulted William by hanging animal skins from the walls, in reference to his being the bastard son of Duke Robert and a tanner's daughter. On capturing the town William chopped off the hands of some twenty citizens in revenge - an act he later repeated at Le Mans.

Alençon was later occupied by the English during the Anglo-Norman wars of 1113 to 1203. 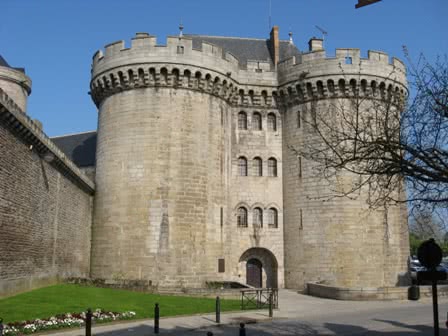 The town became a dukedom in 1415, the title of Duke of Alençon being bestowed upon the younger brothers of the King of France until the French Revolution. Several Dukes of Alençon played important roles in medieval European history. Read more about the Dukes of Alençon here.

The château of the Dukes d'Alençon once stood in the centre of marshland, which made it difficult to attack. It was largely dismantled over the centuries and the stone reused on other buildings, but the still substantial remains of the château are now preserved as a national monument. Three enormous towers and part of the curtain wall are preserved but the interior is not currently open to the public. During the Second World War the château served as the Gestapo headquarters. 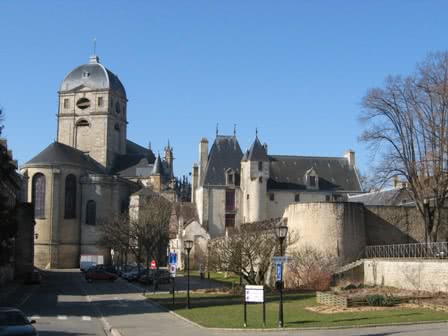 Saint Thérèse de Lisieux was born in Alençon in 1873 and spent her childhood here; the house on Rue Sainte Blaise where she grew up is now a chapel, museum and place of pilgrimage open to the public.

Born Marie-Françoise-Thérèse Martin, Saint Thérèse de Lisieux was born in Alençon on January 2, 1873. Also known as Sainte Thérèse de l'Enfant-Jésus et de la Sainte Face, she was a Roman Catholic nun who was canonized as a saint and is recognized as a Doctor of the Church. She is also known by many as "The Little Flower of Jesus."

St. Thérèse was born the daughter of Louis Martin, a watchmaker and jeweller, and Zélie-Marie Guérin, a lacemaker with her own successful business. Both her parents were very religious. Louis had attempted to become a monk, but a lack of knowledge of Latin hindered him. Zélie-Marie had tried to become a nun, but was told she didn't have the vocation. Instead, she vowed that if she married, she would give all her children to the church. Louis and Zélie-Marie met in 1858 and married only three months later. They had nine children, of whom five daughters - Marie, Pauline, Léonie, Céline and their youngest, Thérèse - survived to adulthood; the family, like many at that time, was subject to tuberculosis.

Her mother died of breast cancer in 1877 when Thérèse was only four years old, and her father shortly afterwards moved to Lisieux in the Calvados region of Normandy. There they lived with her maternal uncle Isidore Guérin, a pharmacist, his wife and two daughters. 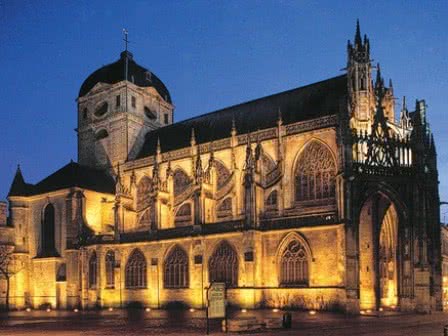 Shortly thereafter, the bishop reversed his decision and in April of 1889 she became a Carmelite nun at the still tender age of fifteen. More misfortune followed and in 1889 her father suffered a stroke and was taken to a private sanatorium, where he lingered for three years before dying. Upon his death her sister Céline, who had been caring for their father, entered the same Carmelite convent that her three sisters were already in; her cousin, Marie Guérin, also became part of that community. Léonie, after several failed attempts, would eventually become a nun in the Order of the Visitation.

Thérèse became mistress of novices in the convent at the young age of 20. Within the Carmel Therese strove to perfect her "Little Way" of dedicating to God everything she did, no matter how trivial. Therèse told the story in her autobiography, "The Story of a Soul" (L'Histoire d'une Ame).

Sadly, at the age of 22 Therèse contracted tuberculosis. She died on September 30, 1897 at the age of 24. She was canonised by Pope Pius XI in 1925 and is often referred to as the greatest saint of modern times. She is the patroness of the Missions and was declared Doctor of the Church, an honour bestowed upon precious few, by Pope John Paul II on 19 October 1997. Her feast day is October 1st.

The house and garden in the centre of Alençon where Therèse spent her early years is open to the public and there is a chapel next door. Visits to the house, morning and afternoon, are free - though voluntary donations are welcome to help pay for the upkeep. Other reminders, such as the baptismal font where Therese and her sisters were baptised, can be seen in the family parish church, the Basilica Notre Dame just down the road.

In 2008 the church of Notre Dame became the Basilique de Notre Dame when Therese's parents were both beatified.
Back to top 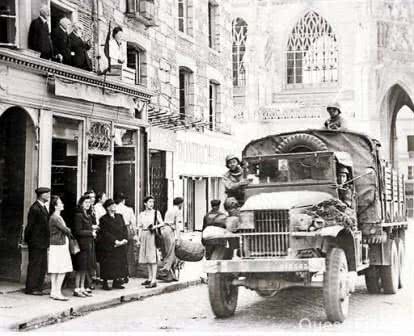 On June 17, 1940, the German army took occupation of Alençon. The old castle keep near the Halle de Blé became the headquarters for the Gestapo in the area during the Occupation. The story of the Occupation is told in a small exhibition hall next to the Tourist Office at the Maison d'Ozé near the Eglise de Notre Dame. On August 12, 1944, the city was liberated by the French 2nd Armoured Division (2 D.B.) under General Leclerc, which had broken through the German 9th Panzer Division lines at Ancinnes and Champfleur the previous day. The French entered the town unopposed as the Germans had shortly before abandoned the town and withdrawn to positions further north in the forest of Ecouves.

Fierce fighting took place on the outskirts of Alençon in the Forest of Ecouves as the Germans unsuccessfully attempted to prevent the forces of Leclerc from linking with American forces at Argentan. The intention of the Allies was to trap in a pincer movement the retreating German forces, 150,000 strong, who were retreating east from Caen towards Paris through a narrow corridor between Argentan and Falaise.

There is a Sherman tank on display in a clearing in the forest of Ecouves and a memorial to those who died during the battle which took place there as the French forces drove north towards Argentan. 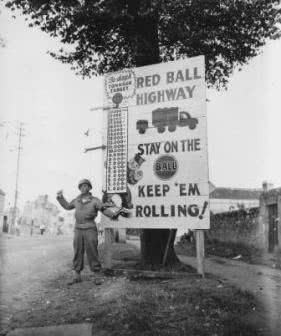 Due to 'misunderstandings' betweeen the various Allied forces, nearly 100,000 German troops (two-thirds of their total strength) succeeded in slipping through the Argentan-Falaise passage between 12th and 20th August 1944. One crucial misunderstanding involved General Leclerc ignoring instructions to advance to the east of Argentan - instead he advanced to both east and west. This blocked the roads west of Argentan to the advancing US 5th Armoured Division and led to the Germans being able to reinforce their defences there. As a result the German defenders at Argentan held out for much longer than they would otherwise have done and kept the passage from Caen to Paris open for several extra days.

However, the Germans did have to leave most of their equipment behind them in their retreat, along with 50,000 prisoners and 6,000 dead. When General Eisenhower visited the area known as the "Falaise Pocket" and saw it piled high with the bodies of men and animals, and the debris of burnt-out vehicles, he described it as "one of the greatest bloodbaths of the war".

There is an important memorial and military museum at Coudehard, high on the hillside overlooking the valley through which the German forces poured in their retreat and where the final action in the battle of Normandy took place.

The following is a brief description of the ten stages involved in making traditional Alençon Lace. This is not meant as a didactic guide to learning how to make Alençon lace, which requires an extensive apprenticeship with individual tuition, but to illustrate the general method of Alençon lace making.


A finished section of lace may be sewn up to others to make a larger piece like a flounce or a collar. In order to assemble pieces invisibly, the lacemaker needs to be familiar with all the stages of the lacemaking process. Nowadays lacemakers are taught all of these stages, but when Alencon lace was produced on a large scale from the 17th to 19th century the lacemakers specialised in one particular step and divided the work accordingly. Only the one who finally assembled the pieces knew all the steps.