Directions and Ferries to Normandy

La Basse Cour is in Ancinnes, a village on the edge of the Perseigne forest: an hour and a half from Caen, three and a half hours from Calais, half an hour from Le Mans and ten minutes from the A28 autoroute at Alençon (8km / 5 miles).

We are in the centre of Ancinnes but out of sight from the main road. Our driveway is marked by a large white "La Basse Cour" sign 50 metres downhill from the church and on the left. 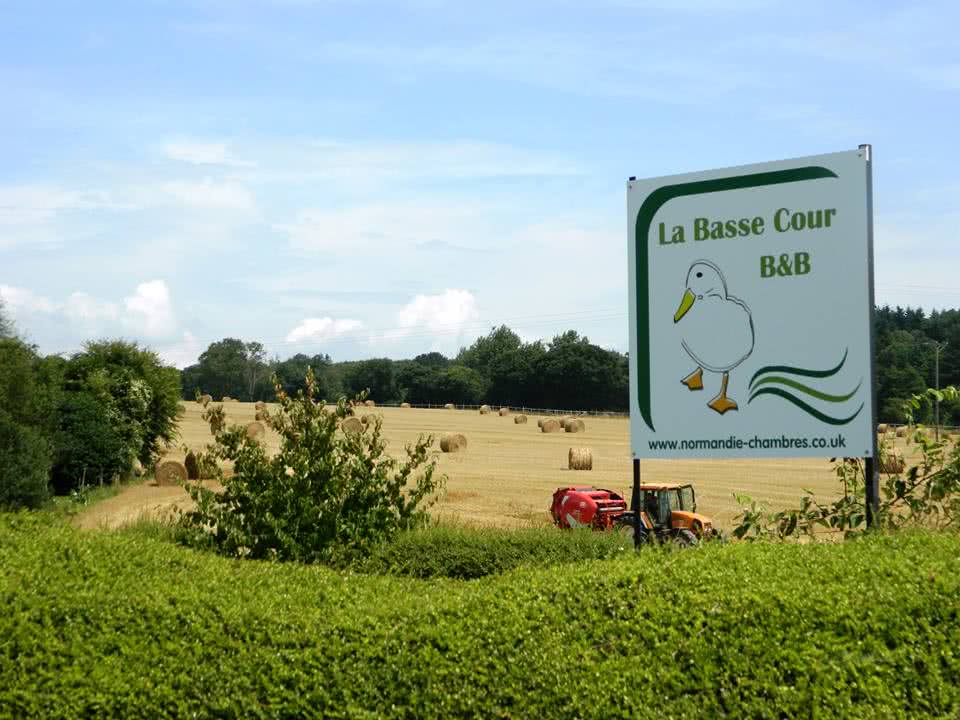 Times to ports by autoroute

From Calais ferry port in under 4 hours

From Calais take the A16 autoroute south towards Boulogne, then at exit 23 signposted Abbeville/Le Tréport/Rouen/Le Havre change onto the A28 - E402 (E402 is the European route number). Around Rouen the signs for E402 are your friend! Once over the river at Rouen keep going straight on (don't be put off by the lack of signs for Le Mans or Alençon) and you'll end up on the A13 towards Le Havre. Follow the A13 west towards Le Havre for only a short distance before turning south again onto the A28 (E402) to Alençon (signposted Bordeaux/Le Mans/Lisieux/Alençon).

Most of the route as far as Rouen is toll free. If you want to avoid tolls you can turn off the A13 earlier and follow the green signposts to Alençon on the D438 instead of the A28 (toll) motorway, but it adds at least 40 minutes to the journey.

From the ferry head for Caen and the ring road. At Caen turn off the ring road when you see signs for Alençon (N158) then for speed and simplicity follow the A88 and A28 autoroutes via Sées to Alençon, or turn off the A88 before Sées and follow signs to Alençon for a route that avoids tolls but is a little slower and a lot busier.


By Road from the south

We are about 4.5 - 5 hours drive north of Bordeaux via Poitiers and Tours, excluding breaks. Head north on the A10 autoroute, before picking up the A28 at Tours signposted Rouen/Le Mans. Stay on the A28 until coming off at exit 20 towards Mamers; after 1km turn left to Rouessé-Fontaine then Ancinnes.

Channel Ferries and Eurotunnel - which route?

North and West France are extremely well served by ferry services from Britain and Ireland to Normandy and Channel ports. If coming by ferry or Eurotunnel, click on the drop-down box above to see approximate drive times excluding halts.

There are many options so there is almost certainly a ferry port/price combination to suit you.

Bear in mind that a shorter ferry crossing from England to France may leave a longer drive on the French side, but may sometimes be quicker overall. Even from the northern port of Calais the drive can be done in about 3 hours 45 minutes, but it is best to allow a extra for stops and delays en route. Delays and traffic queues are particularly common in July and August - allow extra time.

Check out P&O Ferry offers here: P&O Ferry to Calais or click the logos on the right for other routes.


If arriving by train or plane (nearest airports Tours or Paris) then you MUST hire a car in order to get anywhere in rural France and for sightseeing. Public transport is virtually non-existent outside major towns and taxis are expensive, plus they are frequently unavailable in evenings.

How much does car hire cost in Europe? Probably cheaper than you think - see here: Hertz Car Hire

You can easily spend more on train fares and taxis, not to mention the convenience and flexibility that having your own wheels gives you. Hiring a car (Focus or Berlingo) for 4 days typically costs less than 4 taxi fares. Taxis and public transport? No - you need a car!

We are 10 minutes by car (see above for car hire) from the railway station at Alençon, which is served by trains running from Caen to Tours via Le Mans. Le Mans is served by both high-speed and regular trains from Paris Montparnasse.