We Welcome Motorbikes, Bikers and Motorists alike at our Bed & Breakfast


We have welcomed bikers at "La Basse Cour" ever since we first opened our doors in 2005 - and not just for MotoGP and 24 Hour Moto weekends. Normandy and Pays de la Loire, like much of France, have mile upon mile of deserted, winding backroads which are a dream for bikers and motorists longing to escape overcrowded roads.

All parking is off-street and under our supervision, so secure parking is not an issue. If you want to keep your bikes under cover, then the small barn may be available if you let us know in advance and for emergency repairs you can borrow airlines and workshop tools.

Access from the main road is via an unmetalled driveway - it is hard-packed and solid. The main parking area in front of the barn has a stone chipping surface. Easy to ride on, but in some parts it's wise to use a weight spreader (ask us for one if necessary) before leaning heavy bikes on side stands.

There is an airer in the barn for drying wet weather gear. Cloths and detergent can be provided for cleaning helmets and visors.

If you don't want to clutter your room with helmets and gloves etc. then you can leave them in the entrance hall; there's no need to take biking boots off in the house.


It was announced in May 2011 that radar warning signs were gradually being removed, but the removal process was halted after a year. The official government site showing positions of fixed radars in France is no longer maintained since that date. In January 2012 it was announced that all radar warning devices are illegal in France, both passive (GPS) and active detectors.

Equipment which detected speed camera radar signals etc. had always been banned in France, but the new laws took matters a step further by banning SatNav warnings, too. The penalty is a fine of up to 1500€ and 6 licence points.

Websites continue to provide positional information for radar traps, both fixed and mobile. For instance, GPS-data-team.com is a user-maintained site for Speed Cameras in France downloadable to GPS. The fixed points are reliable (but there is no guarantee they are complete) but the mobile radar points often cry wolf as they indicate where speed camera patrols are known to operate, but the gendarmes are rarely there in reality. Mobile speed controls by gendarmes are becoming more frequent - if oncoming drivers flash headlights it may mean that gendarmes are stationed ahead of you.

Are there road problems on your route - the Bison Futé site will tell you.


Download an English language version of some basic rules of Driving in France.


Speed limits are as follows unless otherwise signposted:

Download the 160 commonest French road signs (meanings are in French)


It's sometimes suggested that the French are relaxed about drink driving - but the truth is that in general the police operate a policy of zero tolerance towards drink driving.

In 2012 a law came in requiring bikers and car drivers to carry an approved breathalyser (alcotest or ethylotest), unused and in its original wrapping. The theory was that if you'd had a drink then you would test yourself before driving. Some sites advise you that you need two breathalysers (so that you have one unused after if you have used one) but that is not the case as long as you don't use one!

In fact, however, there are no penalties if you don't have an alcohol test on you - the law is not enforced and you won't be arrested, get penalty points or be fined for not having one. That said, if you feel more comfortable having one then they cost just a euro or two in supermarkets, pharmacies and motorist shops. Be aware that breathalysers are date limited - this year's wont be any good next year. A rule of thumb

The best advice is not to drink alcohol at all when driving. However, as a rule of thumb, and in no way to be taken as a recommendation or legal advice, an average (12 stone) man's limit in France is often quoted as two SMALL glasses of the type SERVED IN BARS AND RESTAURANTS AS STANDARD MEASURES. Those served in homes are generally much larger.

Over 0.8g of alcohol per litre of blood, you will appear in court. The court may order a fine of up to 4500€, two years imprisonment, and a licence suspension up to three years.


Fuel: Petrol and Diesel in France 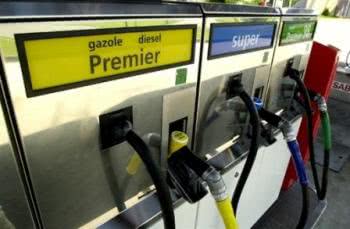 Petrol stations sell diesel (gazole or gasoil, usually yellow or black handles) and unleaded petrol in 95 and "Super" 98 octane (essence sans plomb, usually green or blue handles) . Many also stock LPG (GPL in French) and some also stock bioethanol and paraffin. Make sure you know what you're putting in the tank! Pumps marked 24/24 are USUALLY credit card only, requiring a chip-and-pin card.