This day out takes you to the famous Mont St Michel on the Normandy coast, a classified World Heritage site and one of the most amazing feats of architecture in France.


Access to Mont Saint Michel is NOT affected by the tides - the causeway is always accessible. Mont St Michel is one of the most spectacular sights you could hope to see, so well worth the visit - but be warned that it is also good exercise with many steps and steep slopes. The island setting as well as the views from the top of the abbey are truly spectacular. The journey time to Le Mont St Michel is about two hours (145km or 90 miles).

Allow a couple of hours to explore the island abbey itself. En route you will pass near Bagnoles de l'Orne and Domfront, both of which are well worth a visit if time allows. 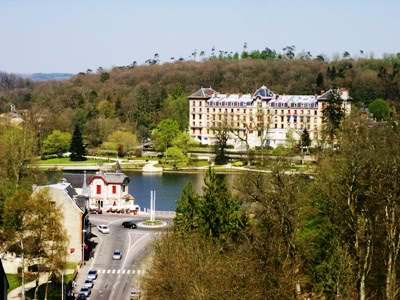 
Optional detour to Bagnoles de l'Orne - 2 hours
If you wish to make a break in the journey to the spa town of Bagnoles de L'Orne, turn right at Couterne. About 1-2 km later turn left on a small road in the direction of Tessé la Madeleine - stop at the bridge to admire the beautiful Château de Couterne reflected in the waters of the Vée. It belongs to the Marquis de Frotté, one of whose ancestors was leader of the Chouan counter-revolutionary uprising during the French revolution.

Continue to Tessé la Madeleine and park in front of the church. The Boulangerie Lenoir is worth a visit to try their macarroons. From here you can walk on towards Bagnoles de l'Orne: this is a typical spa town from the 19th century, similar to Deauville and Cabourg. There is a terrific view over the town from the 'Roc au Chien', accessible by tourist train (30 min return, afternoons only) or on foot (45 mins). On foot, start from the church in Tessé and walk up the avenue du Chateau into the park; the arboretum houses 150 species including sequoias well over 100 years old. Take the avenue on the right at the chateau to arrive at the Roc and admire the view over Bagnoles.
Return to the car and drive through Bagnoles; with the lake on your right, drive past the casino on the D335 into the forest of Andaine. At the crossroads with the D908 turn left in direction of Domfront. 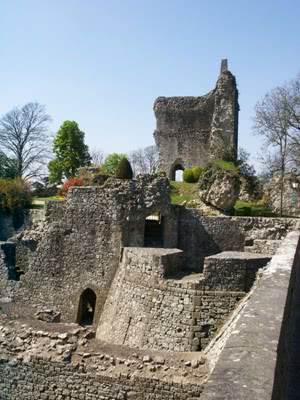 
Optional halt at Domfront - 1 hour
Due to its strategic position, the medieval city of Domfront was for centuries one of the most important strongholds in France. It passed into English hands in 1100 and passed back and forth several times before returning permanently to France in 1450. The ruined castle and ramparts are reached by a bridge over the moat, at the north-west side of the town, giving a terrific view over the surrounding countryside. A visit to the castle and ramparts will take about 30 minutes.

Leaving Domfront on the N176 in direction of Mont Saint Michel, you can see on your left the little chapel of Notre Dame sur l'Eau, whose interior is decorated with superb 12th century frescoes.

End of halt at Domfront


Keep following the N176 through Domfront to St. Hilaire du Harcouët and carry on to le Mont St Michel. There is a great view of the abbey island from the German cemetery at the far end of the bay - this is where most of the postcard photos are taken!

Arriving at the Mont Saint Michel you have to to park your car on the mainland and either walk 2.5km or take one of the "navette" shuttle buses whose departure point is 800m from the car park.

From the car park, take one of the three pathways from the car park to the shuttle bus departure point. The "East" route, called "La Lisière" (the Edge), offers an unobstructed view of the Mont.

The central route takes visitors through "la Caserne" which offers restaurants and a supermarket.

All three routes lead to the Shuttle Square and the dyke road to the Mont Saint Michel.

Walking enthusiasts can extend their crossing from the continent to the Mont by walking along the dyke road, now restricted to authorised vehicles only. The walking time from the Shuttle Square to the Mont Saint-Michel is around 30 minutes.

Alternatively, the shuttle will take you to a point 400m from the ramparts of the Mont Saint-Michel in about 6 minutes - use of the bus is included in the car park charge (8.50€ in 2012). The bus runs every day from 8am to 1am.

After your visit, return to Alençon via the D999 and St Hilaire du Harcouët.