The Dukes of Alencon


Counts and Dukes of Alençon 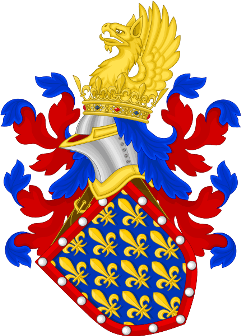 The title of Count of Alençon came into being under the House of Bellême at the beginning of the 11th century; it passed to the royal Capet dynasty from the early 13th century and remained there until 1291 when Charles of Valois, brother of Philip IV of France, was given the county. In 1291 it was bestowed upon Pierre, son of Louis IX of France, and then to Charles of Valois, brother of Philip IV. Charles's second son, also called Charles, was killed at the Battle of Crécy in 1346. The title was thereafter conventionally awarded to a younger brother of the French sovereign.

First Dukes of Alençon - Jean I and Jean II

The county of Alençon was raised to a dukedom in 1414. Jean I Duke of Alençon was killed at Agincourt in 1415, but only after having himself slain the English Duke of York.

His son Jean II of Alençon (1409 - 1476) succeeded his father as Duke of Alençon and Count of Perche as a minor in 1415. Jean II saw action as a young man at the Battle of Verneuil on August 17, 1424 where he was captured by the English forces led by the Duke of Bedford. He was held prisoner until 1429 when he was released after payment of a large ransom; this left him impoverished and the English in possession of his duchy.

Shortly after his release, he met Joan of Arc and joined her in the fighting through the Loire Valley, becoming her most prominent supporter among the princes of the blood. He left to fight elsewhere after the end of the campaign in September 1429, preferring to attack the English around his own domains in Normandy. 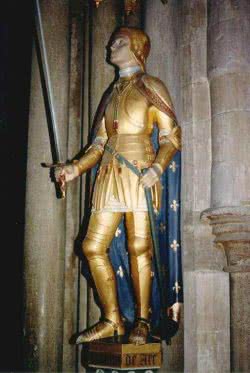 Towards the end of the Hundred Years War Jean II was disappointed with the Treaty of Arras, having hoped to make good his poverty through taking spoils of war from the Burgundians who had sided with England. Instead, the treaty saw a reconciliation between Burgundy and the French king Charles VII. Jean subsequently fell out with Charles VII and even took part in a revolt in 1439-40 (the Praguerie).

He took part in the invasion of Normandy in 1449 and regained his former domain, but he had been in dialogue with the English since 1440 and shortly after testifying at the trial of Joan of Arc in 1456 he was arrested by Jean de Dunois and imprisoned at Aigues-Mortes. In 1458 he was sentenced to death, but the sentence was commuted and he was imprisoned at Loches.

He was released by Louis XI on his accession in 1461, but he refused to keep to the terms of his release and was imprisoned again. He was tried a second time before the Parlement of Paris and sentenced to death again on July 18, 1474, and his lands confiscated. However, the sentence was not carried out and he died in prison in the Louvre in 1476.

On René's death his son, Duke Charles IV (1489 - 1525), succeeded him as Duke of Alençon. In 1509 Charles was wed to Marguerite de Navarre by the decree of King Louis XII, who wished thereby to keep Charles' title of Count of Armagnac in the family. Marguerite became the most influential woman in France when her brother acceded to the crown as Francis I in 1515. Her salon, known as the "New Parnassus", became famous internationally.

The marriage of Duke Charles and Marguerite was childless and on Charles' death in 1525 his titles passed to Marguerite, who then married Henry II of Navarre. She had two children by Henry, a daughter in 1528 and a son in 1530. However, their son died shortly after birth; Henry eventually died in 1555 and in 1559 the Alençon title was given to Catherine de Medici, wife of King Henri II of France.


François, Duke of Anjou and Alençon 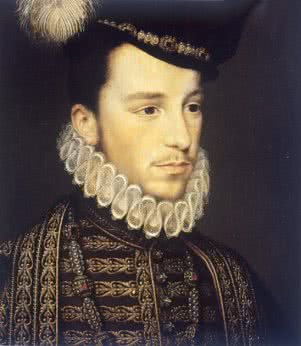 Hercule François (1555 - 1584) was the youngest son of King Henry II of France and Catherine de Medici and in 1566 François took Catherine's right to the title of Duke of Alençon.

In 1574, following the death of his brother Charles IX of France and the accession of his other brother Henry III of France, he became next in line to the throne. In 1576 he was made Duke of Anjou, Touraine and Berry, but relations with his elder brother, the King, were strained.

The same year he negotiated the Peace of Beaulieu during the French Wars of Religion. In 1579 he was invited by William the Silent to become hereditary sovereign to the United Provinces of Holland. On 29 September 1580 the Dutch (with the exception of Zeeland and Holland) signed the Treaty of Plessis-les-Tours with François, who would assume the title "Protector of the Liberty of the Netherlands" and become their sovereign.

Meanwhile in 1581 arrangements began to be made for François of Alençon's marriage to Elizabeth I of England. Alençon was in fact the only one of Elizabeth's many suitors to court her in person. He was twenty-six and Elizabeth was forty-seven. Despite the age gap the two became very close, Elizabeth dubbing him her "frog". Whether or not Elizabeth truly planned on marrying Alençon is doubtful, although she was said to be fond of him. She brought him beef tea every morning and gave him a jewel-encrusted toque to wear until she could give him a crown of his own. However, the English people were very much against the marriage. There were complaints over Alençon's Catholic religion, his French nationality and his mother (Catherine de Medici). English Protestants warned that the "heart of the people would be galled by such a marriage...even the very common people know that he is the son of the Jezebel of our age". Elizabeth also feared childbirth at her advanced age. However, she was engaged to be married to him for three months, possibly to warn Phillip II of Spain what she might do if it became necessary to strengthen her hand against Spain. In the end, however, nothing became of the proposed match.

François left Britain for the Netherlands where he arrived early in 1582 and was officially welcomed by William the Silent.

The Duke of Alençon was no more popular with the Dutch people than with the English, who like the English saw the Catholic French as enemies. The provinces of Zeeland and Holland continued to refuse to recognise François of Alençon as their sovereign and William was widely criticised for his French politicking. Despite this, when François' French troops arrived in late 1582 William's plan to strengthen the Dutch position against the Duke of Parma seemed to be paying off.

However, Alençon himself was dissatisfied with his limited power and decided to attempt take the cities of Antwerp, Bruges, Dunkirk and Ostende by force.

He decided to personally head an attack on Antwerp on January 18, 1583. In an attempt to fool the citizens of Antwerp, Alençon asked to be permitted to enter the city in order to honor them with a parade. However, as soon as the French troops entered the city the gates were slammed shut behind them. The French troops under François were trapped and bombarded from above by stones, rocks, logs and iron chains. Then the city's garrision then opened fire on the troops. Over 1500 French troops died, many hacked to death by the citizens of Antwerp.

Antwerp marked the end of François of Alençon's military career. His position in the Netherlands became untenable and he eventually left the country in June 1583.

Soon afterwards, François fell seriously ill with what was said to be "tertiary ague". Catherine de Medici brought him back to Paris, where he was reconciled to his brother, King Henri III of France in February 1584. Henri even embraced his brother, who he had famously called 'le petit magot' (the little ape). By June 1584 Alençon was dead.

François of Alençon's premature death meant that the Huguenot Henry of Navarre became heir-presumptive to the French throne, leading to an escalation in the French Wars of Religion.

The title of Duke of Alençon was last given to Ferdinand of Orleans, who died in 1910.